While you’re waiting for REMEMBRANCE to come out – I’ve decided to post info I learned and/or odd things that came up while writing the story. Hoping to post on Thursdays. So here we go with Tidbit Thursday.

I noticed lots of triplicates while working on the book. The number three weaved its way into my life and into the story. When I stopped working on the story the numbers seemed to go by the way side. And when I started writing on it again…you guessed it – 3’s. I found it odd and interesting. So besides being a number was there a universal meaning for it showing up? A spiritual one? Hmm…Hello, Google. 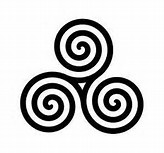 Turns out there is a universal meaning: Three is the first number to which the meaning “all” was given. It is the triad, as it contains the beginning, middle, and end. The power of three is universal and is the tripartite nature of the world as heaven, earth, and water. It is human as in body, soul, and spirit. It’s also in auld Celtic – land, sea, and skye. Interesting and kind of cool. So fast forward to now (because Remembrance has been hanging in the wind for several years), when I decided to split Remembrance and make two books out of it and write a third and final story for Remembrance, because there has to be a final end. But what do I title them? Hmm…oh, why not go with the auld Celtic elements: Land, Sea, and Skye. Remembrance will have 3 books. Book 1: Land of Memories. Book 2: Sea of Seasons. Book 3: Skye of Reckoning.

Also, just a few more things with three. Characters, Arianh Forest and Tiernan Knight both their names are 12 letters (first/last) and in numerology we would add it up: 1+2=3 Sulien (Aiden’s first name from the past) is 6 letters (can be divided by 3). Everywhere I seemed to go I saw 3, 6, or 9 or 12. It was an oddity to say the least.

I also saw spiders. Which as a writer, is a great omen. Spiders weave webs, writers weave stories. However, if you know me you know I’m not a fan of spiders. Having an allergy to them tends to make you not want them near you, no matter how fascinating a critter they may be. Like the three’s I was naturally curious as to why

they showed up every damn time I sat down at my desk to write. It was awful. Spiders have a place and it is NOT in my bedroom. So I went back to Google (a researching writers best friend). Was there a spiritual meaning behind spiders showing up while I wrote? And… yes, there is a meaning and a symbolic nature to them.

Spiders are an ancient symbol of mystery, power, and growth. The spider’s message is about light and darkness and the delicate balance between the two. As a spirit animal spider is considered the kick-starter to creativity. Spider is considered a communicator – writers typically have this animal as their totem. And, interestingly enough, in a lot of Native American stories, Grandmother Spider (as she is called) spins the web of time and knows all aspects of the future and past. And since Remembrance is all the past and future – I find this quite noteworthy.

It’s crazy how these things showed up while I wrote and disappeared when I stopped. And, since I started working on it again – they’ve showed back up and I keep seeing the Raven. That’s another story for another Thursday Tidbit. Until then.

Peace and Love my friends.